Sinusitis, often referred to as a Sinus Infection, is a painful inflammation of the soft tissue that lines the sinuses. It is categorized into two types, acute sinusitis and chronic sinusitis.

Acute (short-term) sinusitis is typically caused by viral infections and it may set in after an allergy attack, exposure to pollutants, or from a common cold. Acute sinus infections will usually clear in a few weeks.

Chronic (long-term) sinusitis on the other hand, is mainly caused by bacteria and can last longer than 12 weeks.

An Overview of the Sinuses

Sinuses are small, bony, cavities filled with air and the different types of sinuses are located in multiple places.

a. Behind the cheeks (the maxillary sinuses)

b. At the forehead behind eyebrows (the frontal sinuses)

C. In both sides of the nose (the ethmoid sinuses)

D. Behind the nose just before the brain (the sphenoid sinuses) 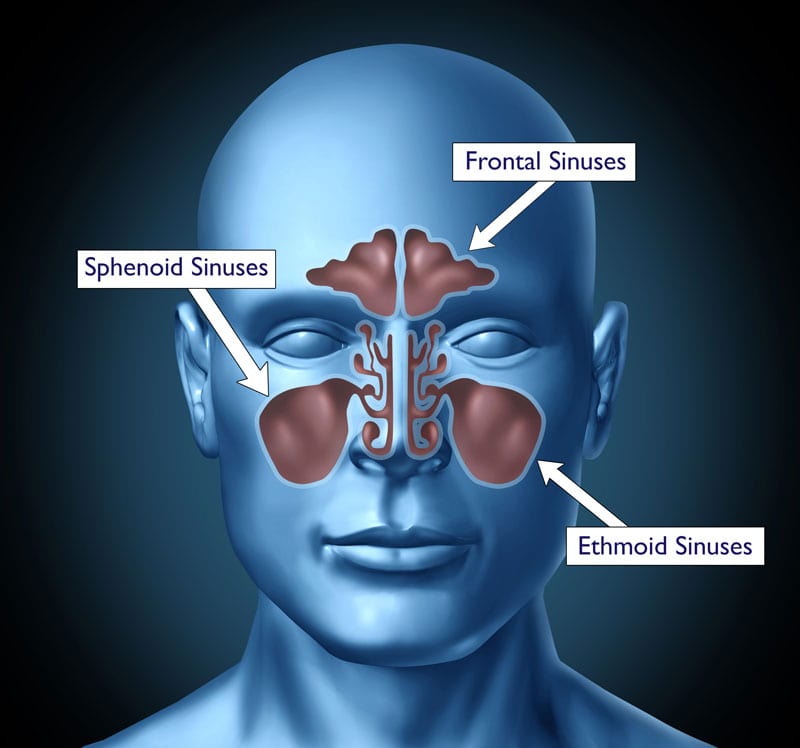 These four sets of sinuses are collectively known as the paranasal sinuses. They perform some of the following functions:

Symptoms of a Sinus Infection

A yellowish or greenish nasal discharge

A cough that worsens at night

Worsening of previously-controlled symptoms of asthma

Tenderness at the bridge of the nose and under the eyes, and a general feeling of tightness around the face

Anosmia – a reduced sense of smell

A general feeling of illness and discomfort

In most cases symptoms of a sinus infection will last between 2 and 3 weeks – this is known as acute rhinosinusitis. There are however fewer cases where the symptoms may last more than 12 weeks (chronic rhinosinusitis).

Infections in the sinuses can be caused by anything that obstructs the outward drainage of mucus and the inward flow of air.

A preexisting infection of the upper respiratory tract

Respiratory infections such the common cold, flu, etc., caused by viruses and other pathogens have been known to cause and worsen sinus infections.

Other causes that may lead to sinus infection:

Sinus infections can be caused by viruses such as influenza viruses, coronaviruses, and may cause or even worsen sinus infections.

The most common types of bacteria known to cause sinusitis are Moraxella catarrhalis, Haemophilus influenzae, and Streptococcus pneumoniae. Recent development of vaccines however, has seen a great reduction in sinusitis cases caused bacterial infections.

Other bacteria known to cause sinus infections include streptococci species, anaerobic bacteria among others with lower impacts.

Between 0.5% and 2% of cases of sinus infection usually progress to bacterial sinusitis. 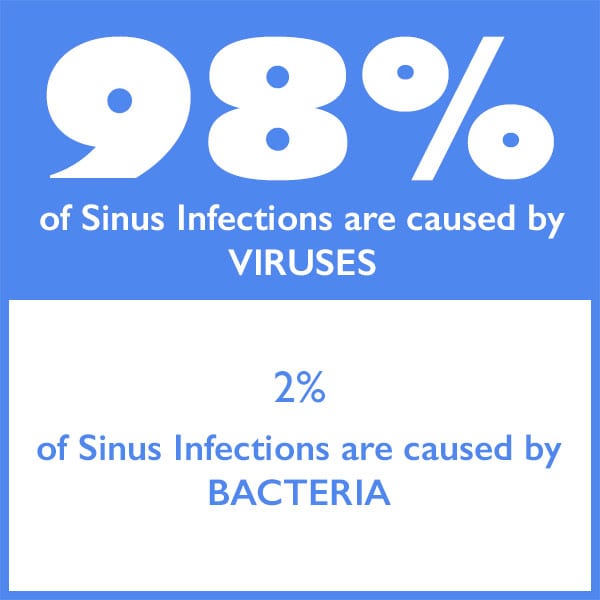 • Chemical Irritation
Exposure to tissue irritants such as OTC nasal sprays, firsthand and secondhand cigar or cigarette smoke, chemical sprays and other irritating fumes can trigger a sinus infection.

Irritants such as smoke damage the tiny hair-like fibers on the lining known as cilia. These hairs are supposed to swing back and forth to help move mucus out and away from the sinuses. When these cilia are damaged, a buildup of mucus is formed in the sinuses leading to sinusitis.

• Allergy
Allergic reaction to triggers such as dust, pollen, and general pollution has been recorded to cause and even worsen sinus infections.

• Hereditary And Anatomic Factors
There are a number of common hereditary abnormalities associated with the sinuses, the throat, and the ducts that lead out of the sinuses. These abnormalities may make one susceptible to chronic and acute sinusitis. Some hereditary factors include abnormally narrow drainage ducts, blockages caused by unusually large air cells, etc.

• Tumors and Growths
Although this is very rare, tumors and growths can lead to chronic sinusitis if they form around the sinuses. They can block the drainage ducts of the sinuses and lead to the buildup of mucus, viruses, bacteria, etc., in the cavities.

• Dehydration, Low Humidity, and Prolonged Usage of Drying Medication
One may also develop sinusitis if he or she is exposed to an environment with little humidity. The individual may also develop an infection is he or she is on medication that causes dehydration. When the water content in the body drops significantly, mucus thickens thereby impairing the drainage of the sinuses.

As mentioned above, poor drainage and an accumulation of mucus in the sinuses allows bacteria and other microorganisms to thrive. This inevitably leads to sinusitis.

• A Fungal Infection
Although rarely, individuals with weak immune systems, or individuals caught up in traumatic situations such as hurricanes, tornadoes, earthquakes and tsunamis may inhale fungi from the soil and other surfaces. Once in their airways, these microorganisms may multiple over days or weeks and cause blockages in the sinuses.

Even though such infections are rare, they can be quite serious, and even deadly if not treated in time.

Do Allergies Cause Sinus Infections?

Allergies can cause sinus infections. Allergic reactions that affect the nasal passages, eyes, sinuses, and other airways have cold-like symptoms. This means that the inflammation caused therefore, may block the sinuses and lead to a buildup of mucus. This may in turn create an environment that allows viruses, bacteria and even fungi to thrive, eventually causing an infection in the sinus.

Sinusitis is very common. It can affect anyone of any age. Statistics indicate that more than 35 million people in the US suffer from sinusitis at least once every year.

The most common risk factors include:

Lying on the back while feeding or drinking

Repeatedly blowing the nose has also been known to cause nasal irritation and that leads to a secondary infection in the sinuses.